The PP-2000 is the latest development of the famous Instrument Design Bureau (KBP) from Tula, Russia. It has been first displayed on public in 2004, although the patent for its layout has been filed in 2001 and issued in 2003. Today (mid-2007) it is already in use with some Law Enforcement (police and state security) units of Russian Federation.
The main "niche" for PP-2000 is a personal defense weapon for non-infantry military personnel, as well as close combat weapon for special forces and special law enforcement teams. As such, it is a compact weapon with as few parts as possible for enhanced reliability, simplified maintenance and low cost. Also, it is designed to fire any standard 9x19mm "ball" (FMJ) ammunition, as well as +P+ class 7N31 armor piercing ammunition of Russian origin.

The PP-2000 is a conventional blowback operated submachine gun, and it is fired from closed bolt for enhanced accuracy. The bolt is telescoped around the rear part of the barrel; front part of the bolt is exposed above the barrel and is fitted with side-folding charging handle. The receiver / housing is made from polymer as a single unit with pistol grip and trigger guard. Trigger guard is enlarged and its front part is shaped to provide front hand grip. The magazine housing is located inside the pistol grip; Housing for spare magazine is located at the rear end of the receiver, and, when inserted, spare magazine is used as a crude shoulder support (buttstock), although and optional removable side-folding butt is currently offered with the gun. 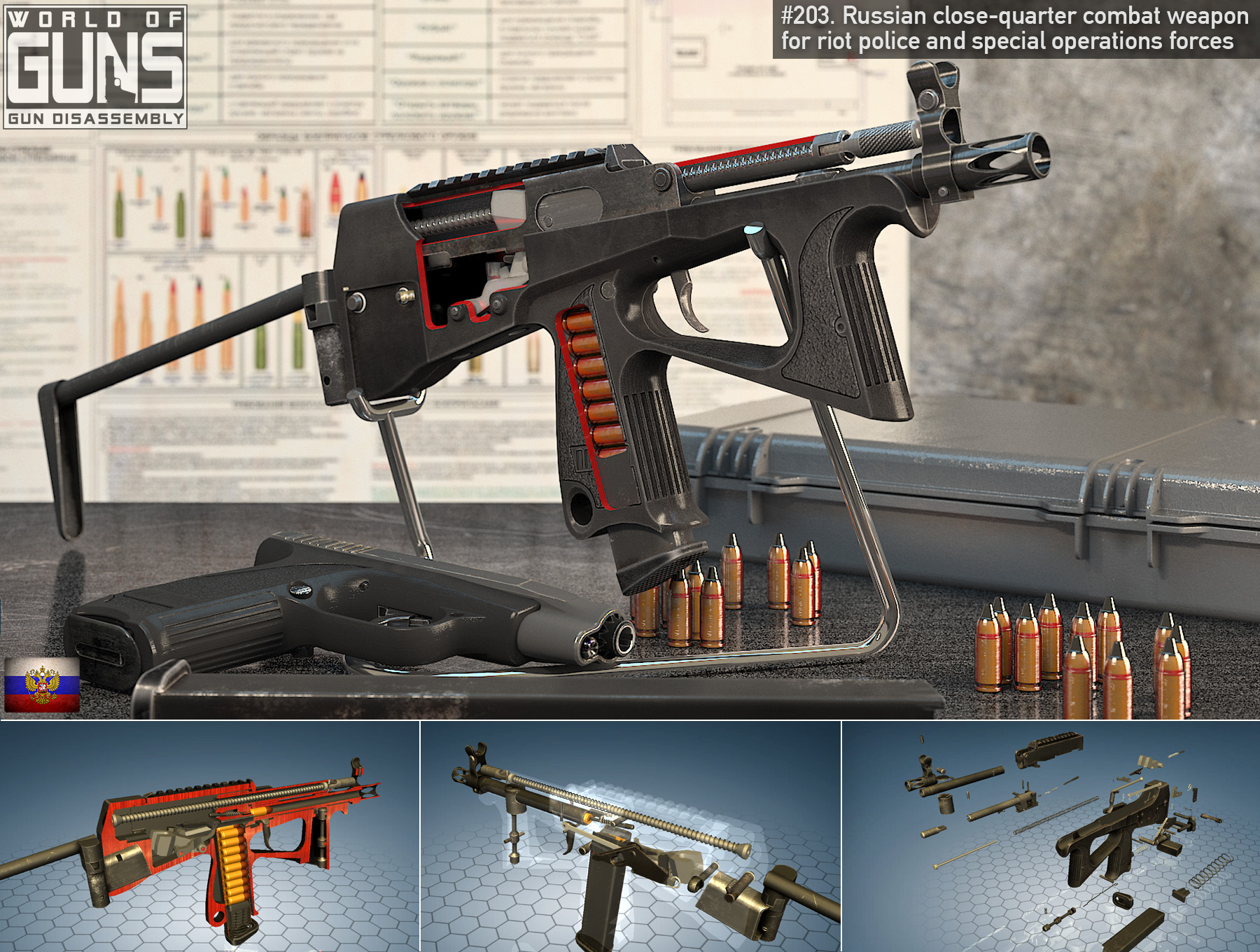 The Hotchkiss Portative light machine gun was designed by famous French arms-making company Hotchkiss in around 1907, and was produced for both domestic use (mostly on early aircraft) and for export. This weapon was an improvement over the original Hotchkiss medium machine gun, and retained a similar gas operated action and used the same feed strips, although the feed system was literally turned upside down compared with the preceding gun. The entire weapon was also made lighter and more compact, and it was used by the USA and the UK, in their respective service rifle calibres. Commercial versions of this gun were also sold to Belgium and Sweden. 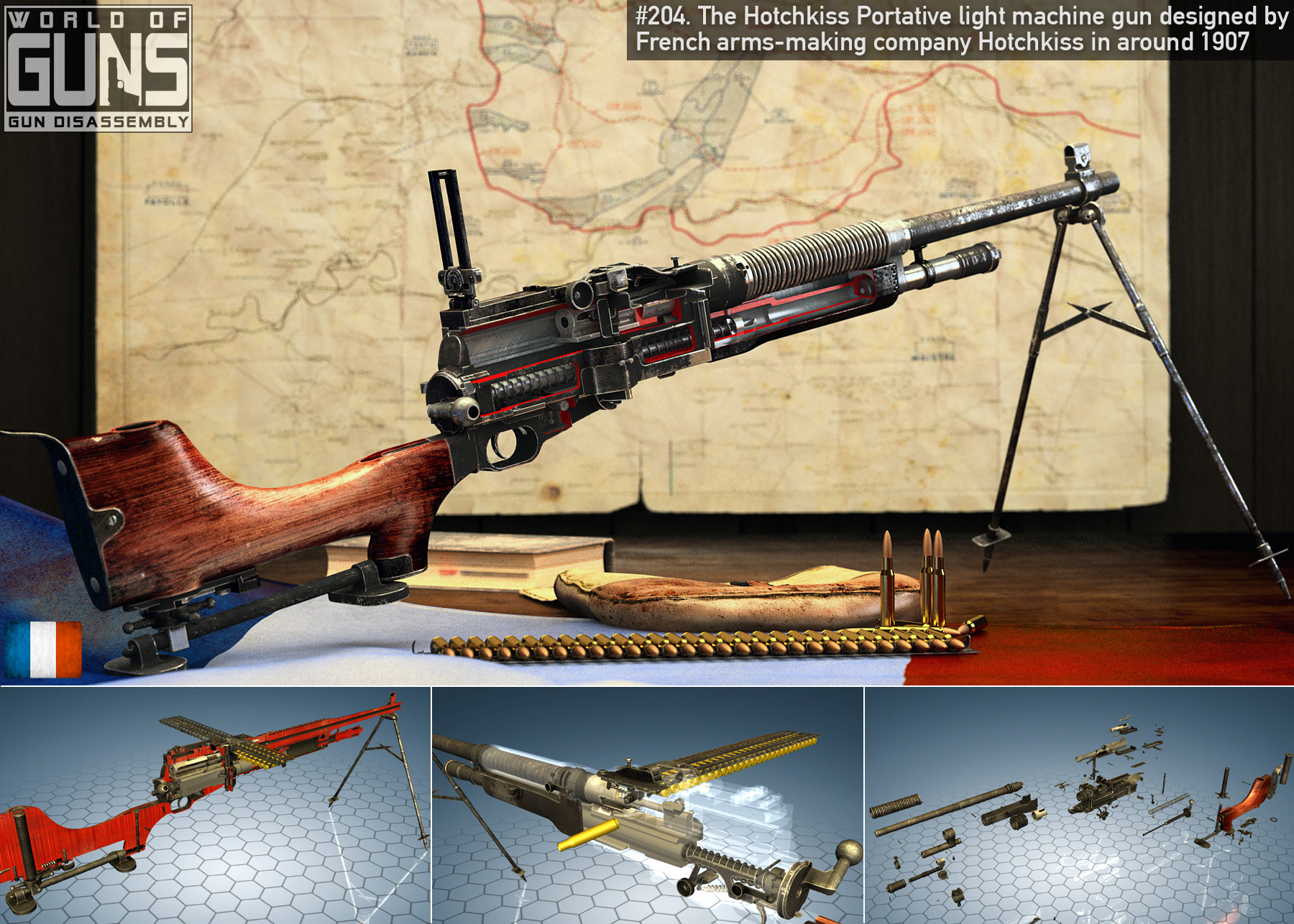 The Astra modelo 400 was a Spanish service pistol produced by weapons manufacturer Astra-Unceta y Cia SA. as a replacement for the Campo-Giro 1913/1916, which had also been chambered in 9mm Largo. It was the standard issue sidearm in the Spanish Army during the Spanish Civil War and also saw service in Germany during World War II.

The pistol was mass-produced and many examples still exist today. The Spanish Navy, along with the German Luftwaffe and the Chilean Navy primarily use the smaller variant Astra 300 and the Wehrmacht later altered the Astra 400 into the Astra 600 to better handle the 9mm Luger. The 400 was considered heavy as in order to handle the power of the 9mm Largo round in a blowback action the 400 had a reinforced slide and tough spring. 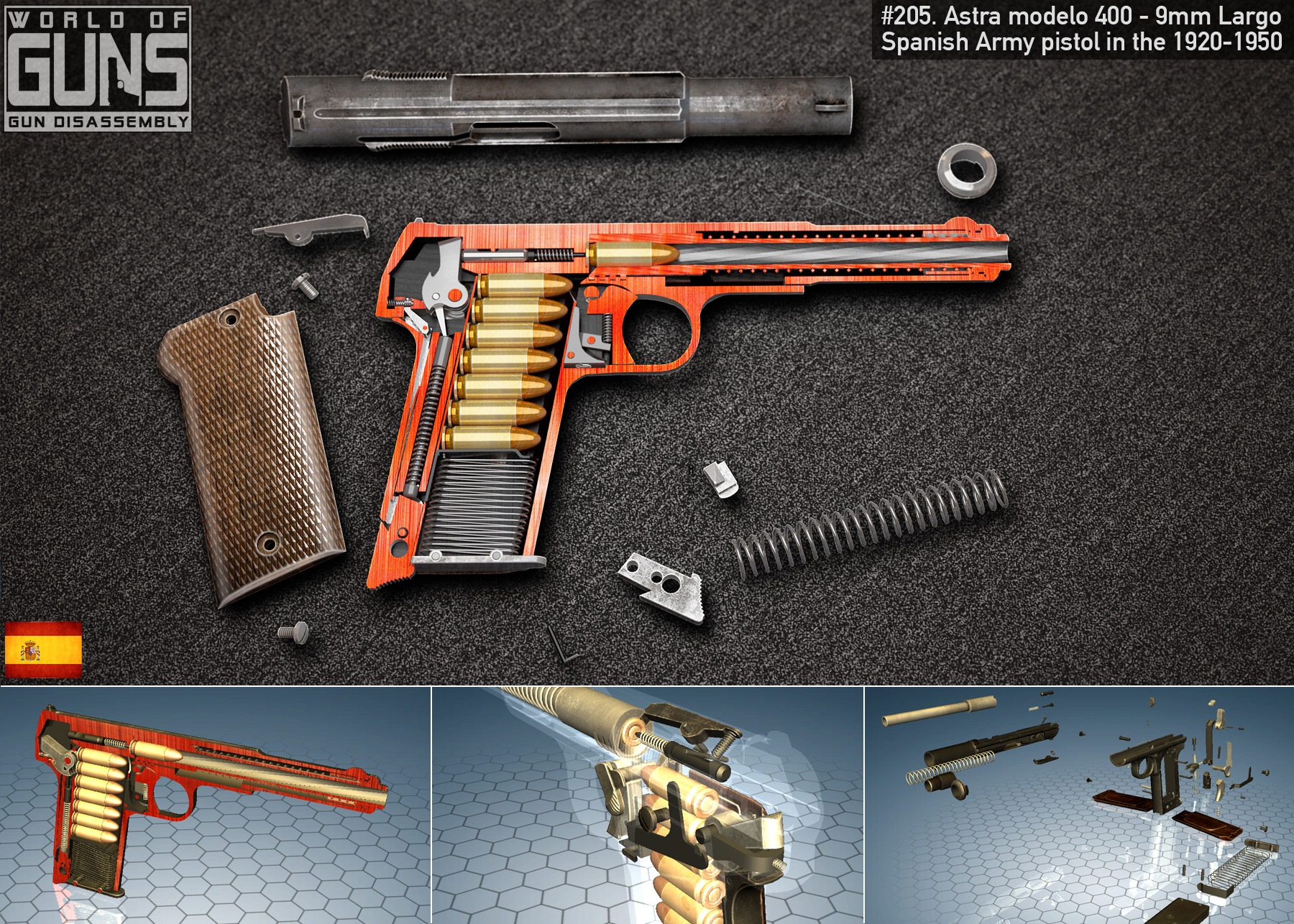 The M1941 rifle used the energy from recoil to operate the rifle. As the bullet and propellant gases moved down the barrel, they imparted a force on the bolt head that was locked to the barrel. The barrel, together with the bolt, moved a short distance rearward until the bullet left the barrel and pressure in the bore had dropped to safe levels. The barrel then stopped against a shoulder allowing the bolt carrier to continue rearward under the momentum imparted by the initial recoil stage. The rotating bolt, which had eight locking lugs, would then lock the bolt. Following, a cam arrangement then rotated and unlocked the bolt to continue the operating cycle. One disadvantage of this design was its impact on the use of a bayonet, as the complex movements of the barrel would be subject to unacceptable stress when a bayonet thrust was used. The Johnson rifle utilized a unique 10-round rotary magazine and a two-piece stock, the weapon using the same 5 round stripper clips used by the M1903 Rifle.

This system had some advantages over the M1 Rifle, including lower felt recoil and greater magazine capacity. The magazine could be recharged using the standard Springfield stripper clips at any time, which the Garand could not; and the Johnson did not suffer from "M-1 ping," the distinctive sound as the Garand's en bloc clip was ejected that the enemy learned meant the shooter was momentarily unable to return fire. Unfortunately, the Johnson's recoiling barrel mechanism resulted in excessive vertical shot dispersion that was never fully cured during its production life, and was prone to malfunction when a bayonet was attached to the reciprocating barrel. The Johnson also employed a number of small parts that were easily lost during field stripping. Partially because of lack of development, the M1941 was less rugged and reliable than the M1, though this was a matter of degree and was not universally opined amongst those that had used both weapons in combat. 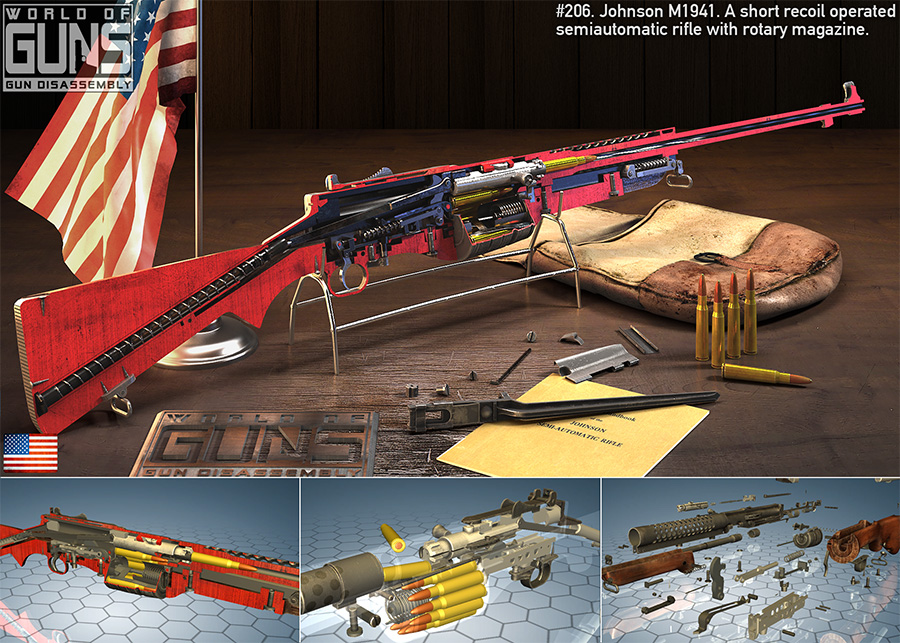 The Suomi KP/-31 (Suomi-konepistooli or "Submachine-gun Finland", literally: "Machine-pistol Finland") was a submachine gun (SMG) of Finnish design used during World War II. It was a descendant of the M-22 prototype and the KP/-26 production model, which was revealed to the public in 1925. The Suomi-konepistooli KP/-31 is often abbreviated to Suomi KP. 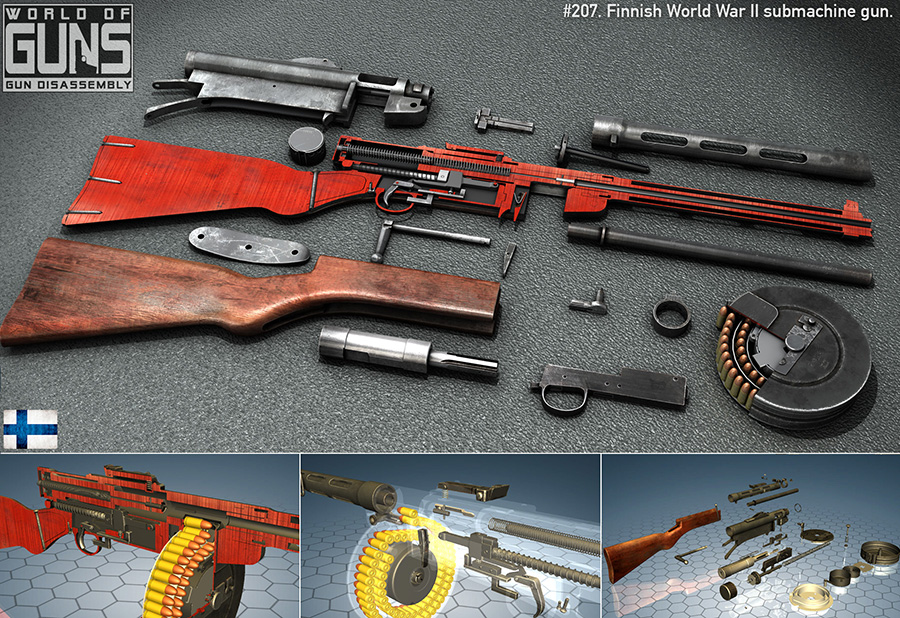 The Scorpion EVO 3 is a 9mm submachine gun manufactured by Česká zbrojovka Uherský Brod in either select-fire A1 or semi-automatic S1 variants. The EVO 3 designation denotes that the firearm is a third generation of CZ's line of small submachine guns started by the Škorpion vz. 61. 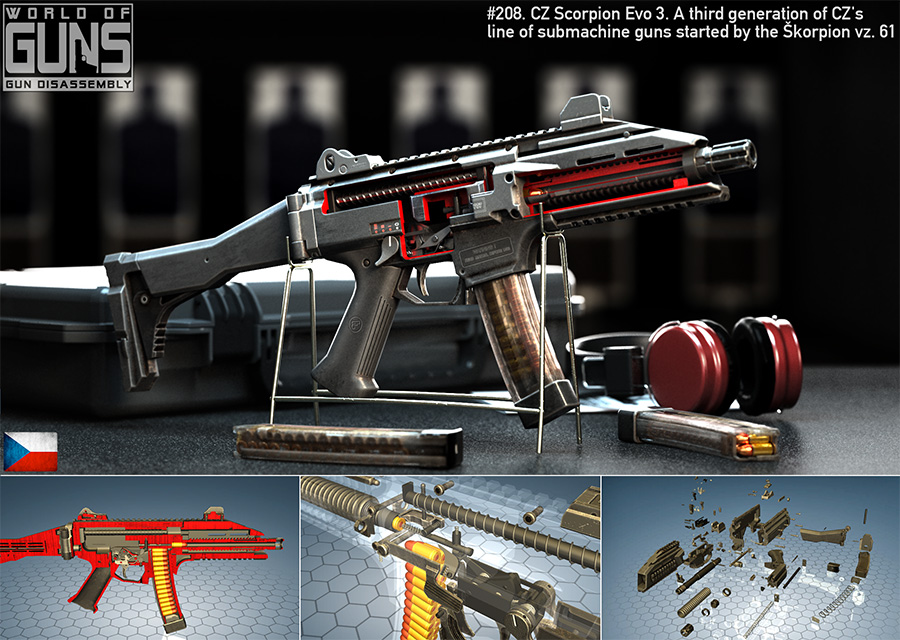 The Steyr M1912, also known as the Steyr-Hahn, is a semi-automatic pistol developed in 1911 by the Austrian firm Steyr Mannlicher, based on the mechanism of the Roth–Steyr M1907. It was developed for the Austro-Hungarian Army and adopted in 1912. "The M1912 is an excellent pistol, strong and reliable," and was able to endure the adverse conditions of trench warfare during World War I.

The M1912 was originally chambered for the 9mm Steyr round, but after Germany annexed Austria in 1938, the Wehrmacht ordered 60,000 M1912 pistols rechambered to 9mm Parabellum which remained in service until the end of World War II. 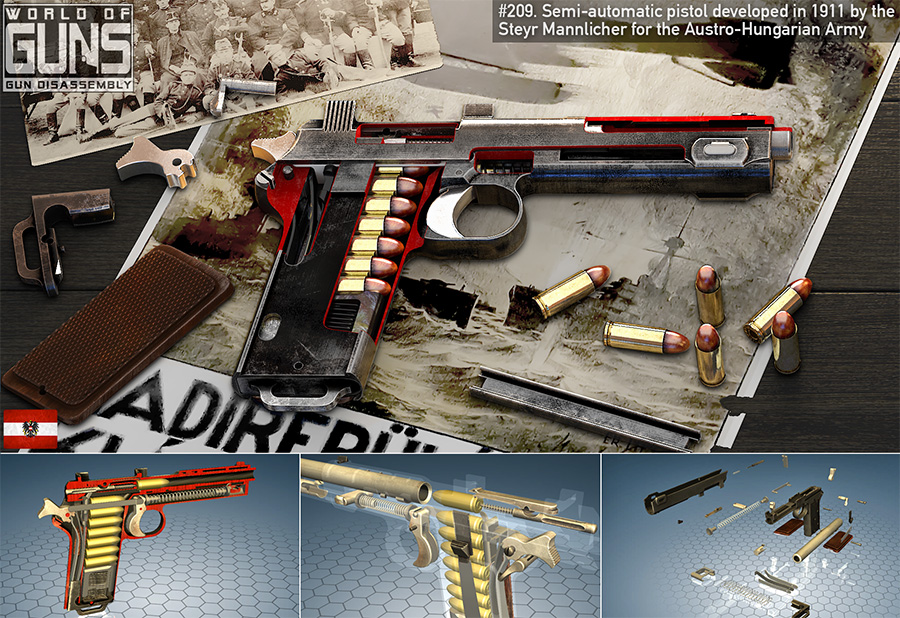 It was manufactured by the Tula Arms Plant for Soviet Spetsnaz troops in the 1980s, and is still used as a personal weapon for modern Spetsnaz troops and special law enforcement groups. The NRS-2 is designed for the blade to either be stabbed or thrown at the enemy, or fire at the enemy using the inbuilt shooting mechanism at distances up to 25 metres. 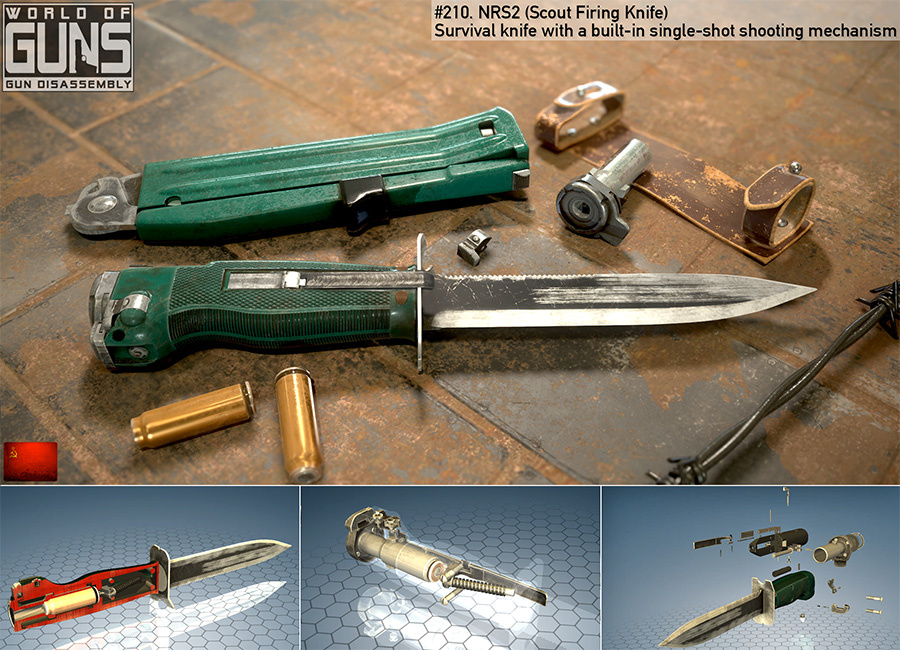 The Fedorov Avtomat (also anglicized as Federov, Russian: Автомат Фёдорова) or FA was an automatic rifle, designed by Vladimir Grigoryevich Fyodorov in 1915 and produced in the Russian Empire and later in the Russian Soviet Federative Socialist Republic. A total of 3,200 Fedorov rifles were manufactured between 1915 and 1924 in the city of Kovrov; the vast majority of them were made after 1920. The weapon saw combat in World War I, but was used more substantially in the Russian Civil War and in the 1939–1940 Soviet-Finnish war. 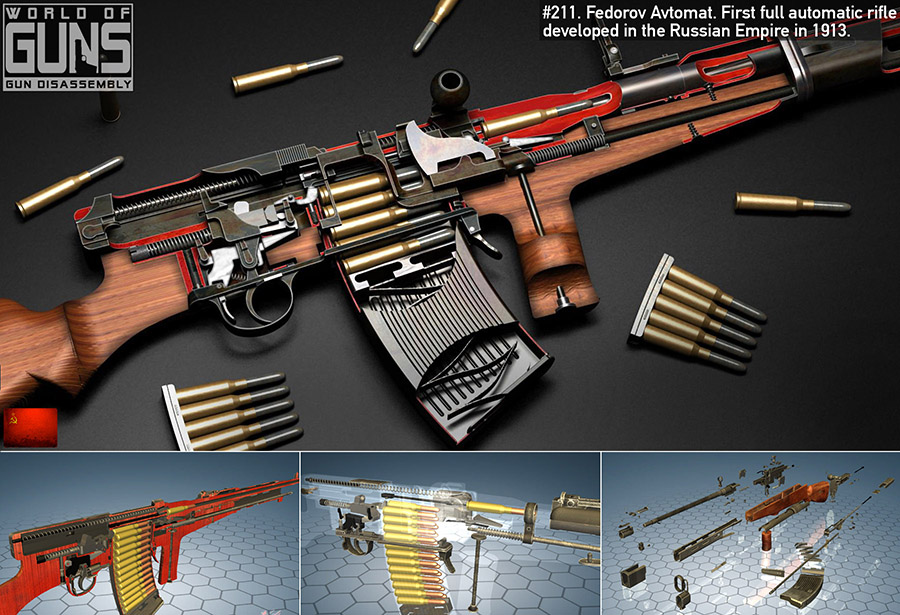