The Heckler & Koch HK417 is a battle rifle designed and manufactured by Heckler & Koch in Germany. It is the larger caliber version of the HK416, and chambered for the full-power 7.62×51mm NATO rifle cartridge. It is a gas-operated, selective fire rifle with a rotating bolt. The HK417 is intended for use in roles where the greater penetrative power and range of the 7.62×51mm cartridge are required. It has been adopted for service by a number of armed forces, special forces, and police organizations. 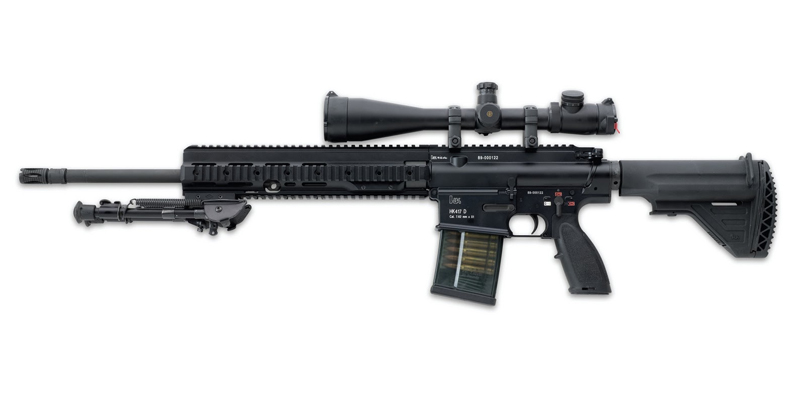 The MAS-49 is a French semi-automatic rifle that replaced various bolt action rifles as the French service rifle that was produced from 1949. It was designed and manufactured by the government-owned MAS arms factory. The French Army formal designation of the MAS-49 is Fusil Semi-automatique de 7,5mm Modele 1949 ("semi-automatic rifle of 7.5mm model 1949"). The MAS-49 semi-automatic rifle was produced in limited quantities (20,600 units), whereas the shorter and lighter variant, the MAS-49/56, was mass manufactured (275,240 units) and issued to all branches of the French military. Overall, the MAS-49 and 49/56 rifles gained the reputation of being accurate, reliable and easy to maintain in adverse environments. All the MAS-49 and 49/56 rifles feature a rail on the left side of their receivers to accommodate a designated rifle scope. The MAS-49 and MAS-49/56 were replaced as French service rifles by the FAMAS assault rifle in 1979. 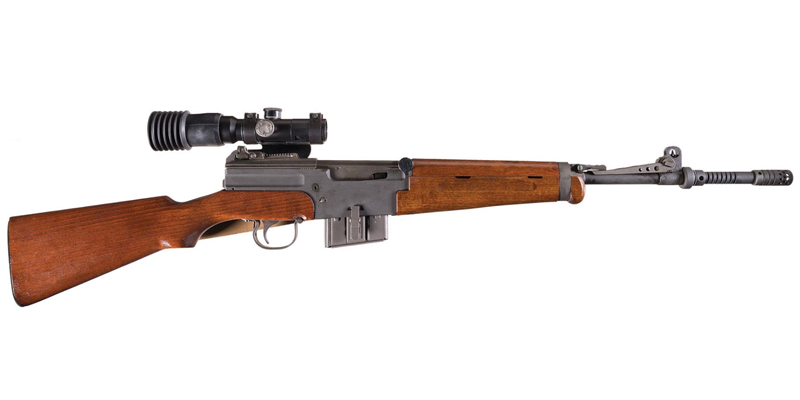 The Kulsprutepistol m/45 (Kpist m/45), also known as the Carl Gustav M/45 and the Swedish K SMG, is a 9×19mm Swedish submachine gun designed by Gunnar Johnsson, adopted in 1945 (hence the m/45 designation), and manufactured at the Carl Gustafs Stads Gevärsfaktori in Eskilstuna, Sweden. The m/45 was the standard submachine gun of the Swedish Army from 1945 to 1965. It was gradually replaced in Swedish service by updated Ak 4 battle rifles and Ak 5 assault rifles. The last official user of the m/45, the Swedish Home Guard (Hemvärnet), retired it from service in 2007. 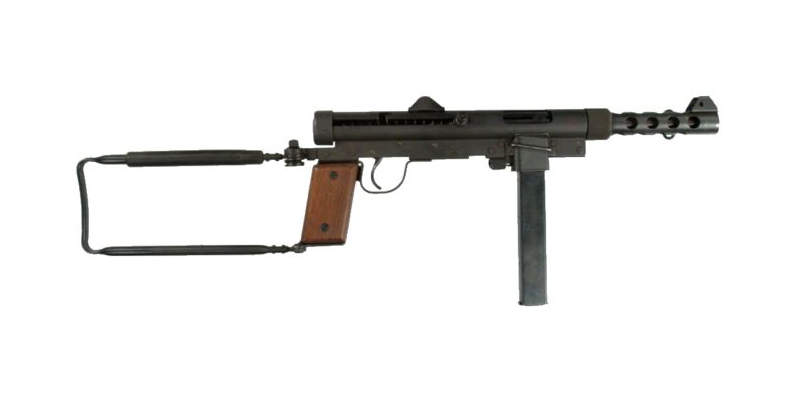 The Solothurn S-18/100 20 mm anti-tank cannon was a German and Swiss anti-tank rifle used during the Second World War. It had a semi-automatic action in a bullpup configuration. As a result of its large, powerful ammunition, the gun had a tremendous recoil, and its size made portability difficult. The feed was either from a five or (more usually) ten-round magazine that was attached horizontally to the left side of the gun. The gun used 20×105mm belted-case ammunition which it shared with the S 18-350 aircraft cannon that was developed from the rifle. A Finnish source gives armour penetration of the gun (probably achieved with the Hungarian APHE-T round, since it was the only type used in Finland) as 20mm at a 60-degree angle at 100-metre distance, decreasing to 16mm at 500 metres. A variant of this design, the Solothurn-Arsenal, was manufactured without license in Estonia before WW2, however only ten were produced prior to Soviet occupation. 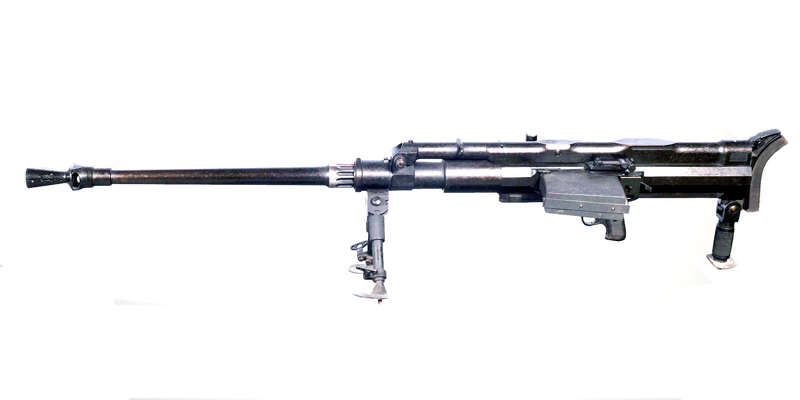 The Gatling gun is one of the best-known early rapid-fire spring loaded, hand cranked weapons and a forerunner of the modern machine gun. Invented by Richard Gatling, it is known for its use by the Union forces during the American Civil War in the 1860s, which was the first time it was employed in combat. Later, it was used again in numerous military conflicts, such as the Boshin War, the Anglo-Zulu War, and the assault on San Juan Hill during the Spanish–American War. It was also used by the Pennsylvania militia in episodes of the Great Railroad Strike of 1877, specifically in Pittsburgh.

The Gatling gun's operation centered on a cyclic multi-barrel design which facilitated cooling and synchronized the firing-reloading sequence. Each barrel fired a single shot when it reached a certain point in the cycle, after which it ejected the spent cartridge, loaded a new round, and, in the process, allowed the barrel to cool somewhat. This configuration allowed higher rates of fire to be achieved without the barrels overheating. 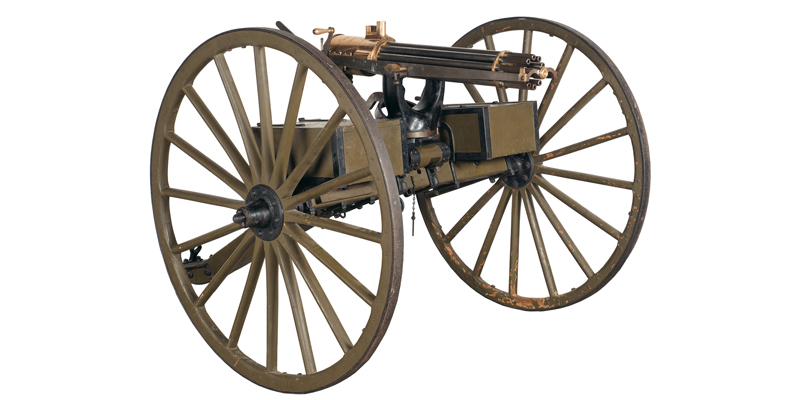 The PSG1 (Präzisionsschützengewehr, German for "precision shooter rifle") is a semi-automatic sniper rifle designed by the German company Heckler & Koch of Oberndorf am Neckar. This rifle is said to have been developed in response to the Munich massacre at the 1972 Summer Olympics. The West German police units could not engage the terrorists quickly enough to prevent them from killing their hostages. H&K was then commissioned to create a high accuracy, large magazine capacity, semi-automatic rifle for police and military use. 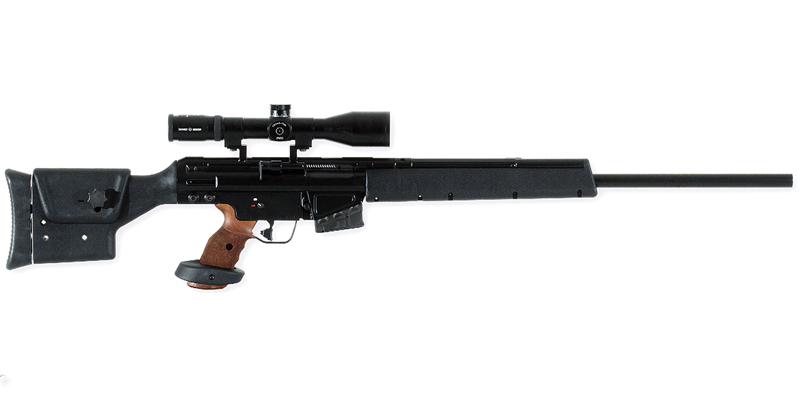 The CAL (Carabine Automatique Légère) was a Belgian weapon manufactured by Fabrique Nationale. It was the first 5.56 mm rifle produced by the Fabrique Nationale. It resembled the company's highly successful FN FAL, but was an original design. Unlike the FAL, it was a market failure, although its development led to the reasonably successful FN FNC. 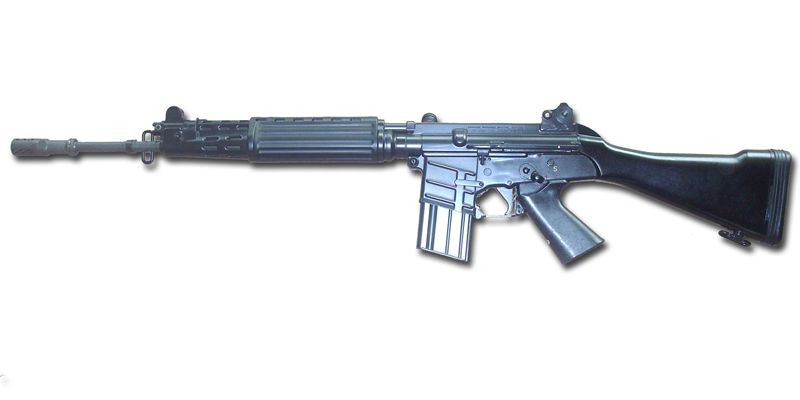 The Ultimax 100 is a Singapore-made 5.56mm light machine gun, developed by the Chartered Industries of Singapore (CIS, now ST Kinetics) by a team of engineers under the guidance of American firearms designer L. James Sullivan. The weapon is extremely accurate due to its constant-recoil operating system. It is considered one of the most lightweight machine guns in the world. 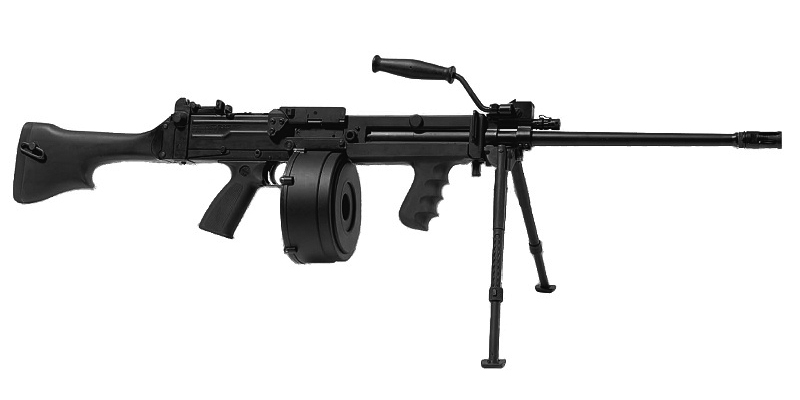 The FN Model 1903 (M1903, FN Mle 1903), or Browning No.2 was a self-loading semi-automatic pistol engineered by John Browning and made by Belgian arms manufacturer Fabrique Nationale (FN). It was introduced in 1903 and fired the 9×20mmSR Browning Long cartridge. It should not be confused with the US-made Colt Model 1903 Pocket Hammerless (in .32 ACP), nor with the Colt Model 1903 Pocket Hammer (in .38 ACP). The FN Model 1903 is based on the same mechanical design as the Colt Model 1903 Pocket Hammerless, which Browning sold to both companies (and others as well), but enlarged to handle the more powerful 9mm Browning Long cartridge. Due to its reliability, accuracy, light weight, and quick reloading, the M1903 was an issued sidearm for many police forces and militaries. The pistol was initially introduced by FN as the Browning Modèle de Guerre (Browning War Model) or Browning Grand Modèle (Browning Large Model) 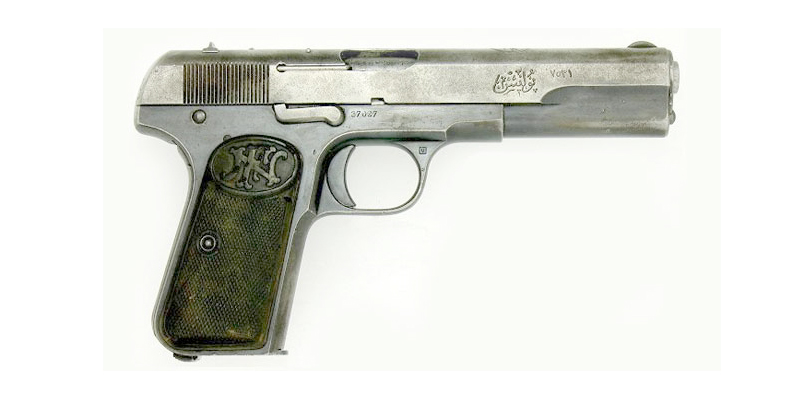 The M240, officially the Machine Gun, 7.62 mm, M240, is the US military designation for the FN MAG a family of belt-fed, gas-operated medium machine guns that chamber the 7.62×51mm NATO cartridge.

The M240 has been used by the United States Armed Forces since the late 1970s. It is used extensively by infantry, most often in rifle companies, as well as on ground vehicles, watercraft and aircraft. Despite being heavier than some comparable weapons, it is highly regarded for reliability and its standardization among NATO members is a major advantage.

All variants are fed from disintegrating belts, and are capable of firing most types of 7.62 mm (.308 in) NATO ammunition. M240 variants can be converted to use non-disintegrating belts. There are significant differences in weight and some features among some versions which restrict interchangeability of parts. The M240s used by the US military are currently manufactured by FN America, the American subsidiary of FN Herstal. 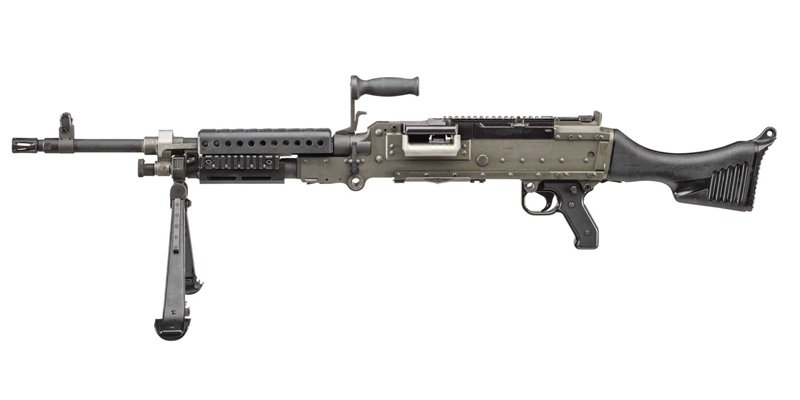